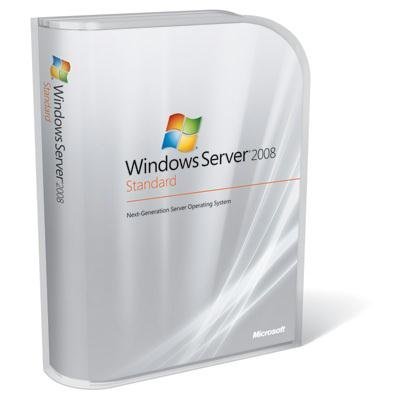 Price:
As of 2020-01-20 20:02:13 EST (more info)
Product prices and availability are accurate as of 2020-01-20 20:02:13 EST and are subject to change. Any price and availability information displayed on http://www.amazon.com/ at the time of purchase will apply to the purchase of this product.
Buy Now from Amazon
Product Information (more info)
0 0
CERTAIN CONTENT THAT APPEARS ON THIS SITE COMES FROM AMAZON SERVICES LLC. THIS CONTENT IS PROVIDED 'AS IS' AND IS SUBJECT TO CHANGE OR REMOVAL AT ANY TIME.

Microsoft Windows Server 2008 is the next generation of the Windows Server operating system that helps information technology professionals maximize control over their infrastructure while providing unprecedented availability and management capabilities, leading to a significantly more secure, reliable, and robust server environment than ever before. Windows Server 2008 delivers new value to organizations by ensuring all users regardless of location are able to get the full complement of services from the network. Windows Server 2008 also provides deep insight into the operating system and diagnostic capabilities to allow administrators to spend more time adding business value. Notable improvements include those to networking, advanced security features, remote application access, centralized server role management, performance and reliability monitoring tools, failover clustering, deployment, and the file system. With these improvements and many others help organizations maximize the flexibility, availability, and control of their servers. Minimum System Requirements - 1GHz (x86) or 1.4 GHz (x64) Processor, 512MB RAM, 10GB Hard Drive, DVD-ROM Drive, VGA or higher resolution

Windows Server 2008 10 Client is the most robust Windows Server operating system to date. With built-in, enhanced Web and virtualization capabilities, it is designed to increase the reliability and flexibility of your server infrastructure while helping save time and reduce costs. Powerful tools give you greater control over your servers and streamline configuration and management tasks. Plus, enhanced security features work to harden the operating system to help protect your data and network and provide a solid, highly-dependable foundation for your business.

Windows Server 2008 builds on the success and strengths of its Windows Server predecessors while delivering valuable new functionality and powerful improvements to the base operating system. New Web tools, virtualization technologies, security enhancements, and management utilities help save time, reduce costs, and provide a solid foundation for your information technology (IT) infrastructure:

Virtualization Built In
Microsoft Windows Server Hyper-V, the next-generation hypervisor-based server virtualization technology, allows you to make the best use of your server hardware investments by consolidating multiple server roles as separate virtual machines running on a single physical machine. You can also efficiently run multiple operating systems--Windows, Linux and others--in parallel on a single server. With virtualization built into the Windows Server 2008 operating system and simple licensing policies, it's now easier than ever to take advantage of the cost savings of virtualization.

Applications can also be efficiently virtualized using Windows Server 2008 centralized application access technologies. Terminal Services Gateway and Terminal Services RemoteApp allow easy remote access to standard Windows-based programs from anywhere by running them on a terminal server instead of directly on a client computer--without the need for a complicated VPN.

Security
Windows Server 2008 is the most secure Windows Server yet. The operating system has been hardened to protect against failure and several new technologies help prevent unauthorized connections to your networks, servers, data, and user accounts. Network Access Protection (NAP) helps ensure that computers that try to connect to your network comply with your organization's security policy. Technology integration and several enhancements make Active Directory services a potent unified and integrated Identify and Access (IDA) solution. And Read-Only Domain Controller (RODC) and BitLocker Drive Encryption allow you to more securely deploy your AD database at branch office locations.

A Solid Foundation for Your Business Workloads
Windows Server 2008 provides a solid foundation for all of your server workload and application requirements while being easy to deploy and manage. The all-new Server Manager provides a unified management console that simplifies and streamlines server setup, configuration, and ongoing management. Windows PowerShell, a new command-line shell, enables administrators to automate routine system administration tasks across multiple servers. Windows Deployment Services provides a simplified, secure means of rapidly deploying the operating system via network-based installations. And Windows Server 2008 Failover Clustering wizards, and full IPv6 support plus consolidated management of Network Load Balancing, make high availability easy to implement even by IT generalists.

Finally, the new Server Core installation option of Windows Server 2008 allows for installation of server roles with only the necessary components and subsystems without a graphical user interface. Fewer roles and features means minimizing disk and service footprints while reducing attack surfaces. It also enables your IT staff to specialize according to the server roles they need to support.

Security
Windows Server 2008 is the most secure Windows Server ever. Its hardened operating system and security innovations, including Network Access Protection, Federated Rights Management, and Read-Only Domain Controller, provide unprecedented levels of protection for your network, your data, and your business.

Security
Windows Server 2008 is the most secure Windows Server ever. Its hardened operating system and security innovations, including Network Access Protection, Federated Rights Management, and Read-Only Domain Controller, provide unprecedented levels of protection for your network, your data, and your business.

Microsoft BitLocker provides additional security for your data through full volume encryption on multiple drives, even when the system is in unauthorized hands or running a different operating system time, data, and control.

Failover Clustering: Improvements are aimed to makes it easier to configure server clusters while providing protection and availability of your data and applications. By using the new Validate Tool in failover clusters, you can perform tests to determine whether your system, storage, and network configuration is suitable for a cluster. With failover clusters in Windows Server 2008, administrators can carry out setup and migration tasks, as well as management and operations tasks more easily. Improvements to the cluster infrastructure help administrators maximize availability of the services they provide to users, achieve better storage and network performance and improve security.

Server Core: Beginning with the Beta 2 release of Windows Server 2008, administrators can choose to install Windows Server with only the services required to perform the DHCP, DNS, file server, or domain controller roles. This new installation option will not install non-essential services and applications and will provide base server functionality without any extra overhead. While the Server Core installation option is a fully functioning mode of the operating system supporting one of the designate roles, it does not include the server graphic user interface (GUI). Because Server Core installations include only what is required for the designated roles, a Server Core installation will typically require less maintenance and fewer updates as there are fewer components to manage. In other words, since there are fewer programs and components installed and running on the server, there are fewer attack vectors exposed to the network, resulting in a reduced attack surface. If a security flaw or vulnerability is discovered in a component that is not installed, a patch is not required.

Windows PowerShell: A new command-line shell with over 130 tools and an integrated scripting language. It enables administrator to more easily control and securely automate routine system administration tasks, especially across multiple servers. Windows PowerShell does not require you to migrate your existing scripts, and it is ideally suited for automation of new Windows Server 2008 features. A new admin-focused scripting language, and consistent syntax and utilities, Windows PowerShell accelerates automation of system administration tasks--such as Active Directory, Terminal Server, and Internet Information Server (IIS) 7.0--and improves your organization's ability to address the unique system management problems of your environment.

Windows PowerShell is easy to adopt, learn, and use, because it does not require a background in programming, and it works with your existing IT infrastructure, existing scripts, and existing command-line tools.

Features
IT professionals who are administering a Windows Vista / Windows Server 2008 infrastructure will notice many improvements in how they control and manage their environment.

The reliability, scalability, and overall responsiveness of the infrastructure are greatly increased by improvements made to both Windows Vista and Windows Server 2008.

Windows Vista clients connecting to networks where Windows Server 2008 has been deployed can experience greatly improved communication speeds and reliability.

Maximize control over your infrastructure while providing unprecedented availability and management capabilities, leading to a significantly more secure, reliable, and robust server environment than ever before Gives you the ability to deliver rich web-based experiences efficiently and effectively, with improved administration and diagnostics, development and application tools, and lower infrastructure costs Built-in server virtualization technology enables you to reduce costs, increase hardware utilization, optimize your infrastructure, and improve server availability Hardened operating system and security innovations, including Network Access Protection, Federated Rights Management, and Read-Only Domain Controller, provide unprecedented levels of protection for your network, your data, and your business New technologies and features such as Server Core, PowerShell, Windows Deployment Services, and enhanced networking and clustering technologies