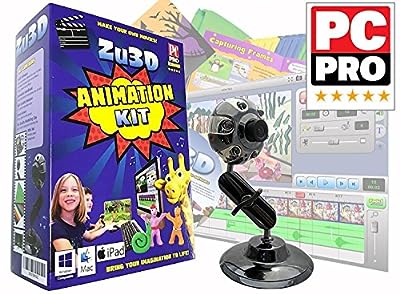 Price: $49.95
As of 2020-01-20 08:07:34 EST (more info)
Product prices and availability are accurate as of 2020-01-20 08:07:34 EST and are subject to change. Any price and availability information displayed on http://www.amazon.com/ at the time of purchase will apply to the purchase of this product.
Buy Now from Amazon
Product Information (more info)
0 0
CERTAIN CONTENT THAT APPEARS ON THIS SITE COMES FROM AMAZON SERVICES LLC. THIS CONTENT IS PROVIDED 'AS IS' AND IS SUBJECT TO CHANGE OR REMOVAL AT ANY TIME.

Creative Fun For The Whole Family!

Used in tens of thousands of homes & schools, the Zu3D Animation Kit allows you to create amazing animated films with sound effects, music, titles & credits, green screening, imported effects and much, much more.

In the kit are two licences for the amazing Zu3D animation software. These licences allow you to use Zu3D on Windows PC, Mac OSX or iPad.

Animate with the included USB webcam, or use your smartphone or tablet as a wireless camera, streaming HD (1920x1080) images to your PC or Mac.

Create films about anything & everything, using; Lego, Playmobil, Stikbots, Plasticine, toys etc. Import live action video, straight from your smartphone or tablet and combine with your animation on unlimited videos tracks to make amazing feature films. Finished animations can be uploaded to YouTube or the Zu3D gallery.

Educational, Creative, STEAM, Used in thousands of schools, Zu3D is the educators' choice for animation software

Zu3D has been used to make dragons eat schools and dinosaurs wander down corridors. Children have had face to face conversations with their own clay creations made life sized, they've ridden unicorns through cloudy skies and cleaned the teeth of giants.